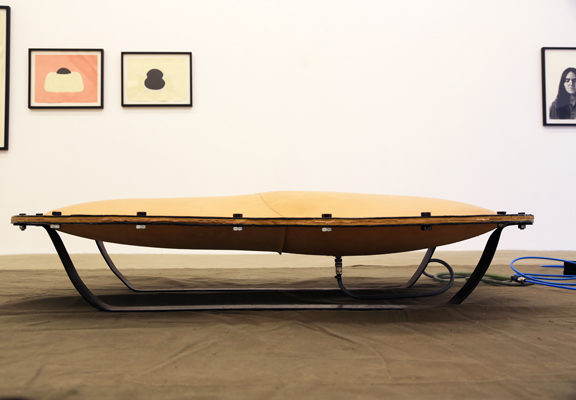 For the stipend exhbition at Skånes konstförening the work Expedition/Skomakarlunga (2015), will be exhibited. A body, painstakingly forced to breathe in and out by the help of a compressor. Inspired by a machine used by cobblers and Andrées polar expedition, our mind is led to a sleigh being pulled across the ice and a tedious life-sustaining work.

The work is inspired by a machine I saw at my friend Severino Zia´s, a legendary shoemaker that used to be at Jägersrovägen in Malmö. Zia made shoes for the former Pope, Queen Silvia and a variety of people with particular feets that he casted off and made new lasts for. He also made a copy of Karl XI’s boot to me, that I casted in bronze a few years ago. Severino sadly died two years ago. He loved the work by the hand and was able to talk at length about the joy handcraft gave him.
He was convinced that well handmade shoes extends the life of the one who wears them. He was convinced that he could live for at least 150 years with the help of a spiral and pyramid design that would convey the cosmic forces to him. The construction was difficult to finance and never saw the light of day, which is a shame since a lot of his knowledge disappeared with him.
– Linnéa Carlsson

Ester Dorothea Almqvist (1869-1934) was one of the artists who paved the way for the breakthrough of modernism in Sweden. Her art was marked by expressionism’s intense color saturation, and – above all – an outspoken alignment that allowed full freedom in her powerful and dynamically composed paintings. She often depicted Landscapes, where the motifs completely penetrated, well animated, the painterly gesture. Among her close friends we find some of the great contemporary artists of the time; Tora Vega Holmström, Maja Fjaestad, Maj Bring, Siri Derkert and Vera Nilsson among others. During 1992 Ester Almqvist’s artistic practice got international attention, when the United Nations chose her painting Gathering (1929) as a motive for one of six stamps in a series that celebrates the Declaration of Human Rights. Almqvists painting illustrates Article 20: ”Everyone has the right to freedom of peaceful assembly and association.” Ester Almqvists Memorial Fund was established in 1965 with the aim of managing the assets entrusted by Ester’s sister, Maria Almqvist (1871-1964). Each year one or several artists working in Skåne are awarded a stipend. Since the the fund was established sixty artists has received stipends from Ester Almqvists Memorial Fund. During 2016 the stipend was awarded for the fortieth time.

The Foundation Board in 2016 consisted of: